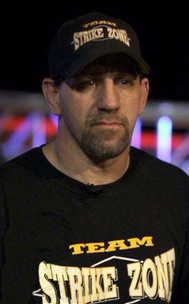 ​​Darryl started training and coaching MMA fighters out of his garage until he was able to open Strike Zone MMA in 2001.  In September 2014, Darryl moved his team, known as "Team Strike Zone",  to 31 Clinton Avenue, Norwich, CT.

​Darryl's wealth of knowledge comes from personally training and competing in various disciplines over the years.  He represented Team USA at the 1999 Sombo World Cup Championships in France and came home with a Silver Medal.  He placed 2nd at the National Judo Championships in 1983 and was a New England Muay Thai Champion in 1986.  In 2004, Darryl won the U.S. Mixed Martial Arts Championships.  He retired from MMA fighting with a record of 6-1.

Darryl's road to MMA began when he decided to start wrestling while in high school. During his high school wrestling career Darryl was a two-time S.A.C Champ, LL Champ, two time Connecticut State Freestyle Champ, and two time New England Freestyle Champ. He placed 1st in the Northeast Regionals in Greco Roman and placed 2nd in Freestyle.  His record going into to the 1982 Junior National Championships in Iowa was 129-1 from March to July.  While at the Junior National Championships he placed 5th out of 65 wrestlers in Greco Roman and placed 7th out of 95 wrestlers in Freestyle to become Connecticut's first All American in both Freestyle and Greco Roman wrestling.

Darryl continued with his wrestling career after high school.  In 1983, he placed 3rd in the World Team Trials in Greco Roman and was the 1988 Regional Olympic Qualifying Trials Champion.  He went on to win four more New England Freestyle Championships, was the 1989 AAU Greco Roman National Champion, won a silver medal at the National Championships in Freestyle, and was a two time Ironman Wrestling World Champion, which is three days of wrestling with a different style each day (Folkstyle, Freestyle, and Greco Roman).

In 2014, Darryl was again recognized for his wrestling and mixed martial arts career by being inducted into Norwich Sports Hall of Fame.