Holland is a Certified Full Instructor in Krav Maga, the empty-handed combat style of the Israeli Defense Forces. He underwent his training at the Elite Krav Maga Instructors Course in Fayetteville, Arkansas, where he became certified in Israeli Counter Terrorism Tactics in 2014 under Krav Maga head instructor Marty Cale. Holland holds black belts in Tang Soo Do, Kempo, and MCMAP (the official hand-to-hand combat style of the U.S. Marines).

Holland began his martial arts training at the age of 10 in response to constant bullying in elementary and middle school. After altercations at school began to turn into violent encounters with no assistance from school authorities, Holland started training in the art of Tang Soo Do. At the age of 16 Holland received his 1st Degree Black Belt under Grandmaster Steven Voelker. After training and teaching under Grandmaster Voelker for 7 years, Holland began training under Master Keith Tubman in the art of Kempo Karate. In 2012 he earned his 3rd Degree Black Belt and continues to train and teach in the art of Kempo.

In 2008, Holland enlisted in the U.S. Marine Corps and earned several awards such as the Combat Action Ribbon and the Afghanistan Campaign Ribbon during his 7-month combat tour. During his time in the Marine Corps, Holland was able to earn a 1st Degree Black Belt in MCMAP as a Lance Corporal (E-3), a rank deemed too low to earn a black belt. ​

Holland has been fully involved in martial arts for over 15 years, and continues to work with students and expand his martial arts knowledge. He has taught hundreds of students with various disabilities, as well as victims of multiple crimes, ranging from assault victims to rape victims.

Holland began training at Strike Zone in 2015. He has competed successfully in Amateur MMA, Boxing and Kickboxing. Holland continues to train and assists with coaching every night. He's looking forward to his next Amateur MMA fight with the hope of making his pro debut in the somewhat near future. 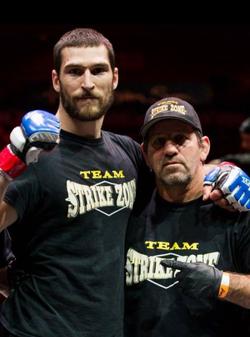